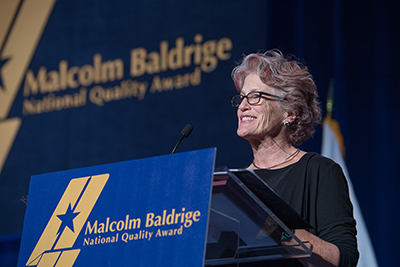 Molly Baldrige, daughter of Secretary Malcolm Baldrige, at the 29th annual Quest for Excellence Conference in Baltimore. The Baldrige family made the largest single donation in the history of the Foundation. Here, Molly challenges others to support the Foundation and the ongoing effort to preserve the Baldrige Enterprise.

July 25, 2018, marked the thirty-first anniversary of the tragic passing of Secretary Malcolm Baldrige. He died July 25, 1987, while serving as Secretary of Commerce under President Ronald Reagan, from injuries suffered in a rodeo accident.

It was the untimely passing of Malcolm Baldrige that galvanized support in Congress to codify a quality improvement program and national quality award in his name.

President Ronald Reagan said during Mac Baldrige’s eulogy, “I always prized the quality of Mac’s vision. He had the capacity to look up from the dust of the plains to the distant mountains.”

Molly Baldrige, daughter of the late Malcolm Baldrige, appeared at the 29th Annual Baldrige Quest for Excellence® conference in Baltimore in early April.  Ms. Baldrige was the keynote speaker at the Foundation’s Annual Dinner in 2016, and she returned to Quest in 2017 to continue to show her personal as well as her family’s support.

The Baldrige Family continues to challenge the Baldrige Community worldwide to join them in supporting the growth of Baldrige by donating to the Foundation and its mission.

“I always prized the quality of Mac’s vision. He had the capacity to look up from the dust of the plains to the distant mountains.”

Ms. Baldrige congratulated the four award recipient organizations, recognized the efforts of Baldrige examiners by presenting them with a certificate at their recognition ceremony, and announced a major gift from her family to the Baldrige Foundation to support the Baldrige Performance Excellence Program.

“One of the most important occurrences of the past several years,” said Foundation President and CEO Al Faber, “is the re-emergence of the Baldrige family as vocal advocates for the Baldrige Enterprise. Molly’s presence truly invigorates this community. It is not just the love for her father that she shows so clearly, but her reverence for the quality movement that bears his name. That connects. The Baldrige program, at 30 years, is one of the longest lasting, most enduring frameworks in the history of management science.”

This year, Ms. Baldrige announced that she, her mother Midge and sister Megan had decided to make a substantial contribution to the Foundation to further its efforts to secure the future of the Baldrige Enterprise. 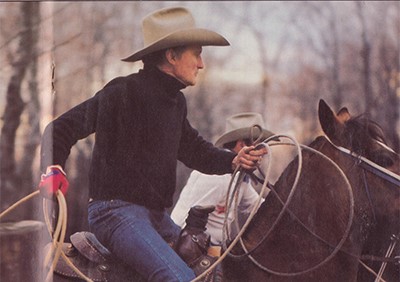 Mac Baldrige on the ranch. Photo courtesy of Molly Baldrige.

“We choose not to disclose the amount of the gift out of respect for the donor’s privacy,” said Faber, “but I can tell you that the Baldrige Family has made the largest single gift to the Foundation in its nearly 30-year history. And they have challenged others to join them.”

“We sincerely hope,” Molly Baldrige said, “that companies, organizations, and individuals will join the Baldrige family in support for such a worthy cause.”

“There is no better effort to make for our country than to strengthen its organizations by making them more efficient and competitive,” she concluded, “and it’s been proven that Baldrige does this across all sectors of the economy.”

To learn more about the Baldrige program or to donate, please follow this link: