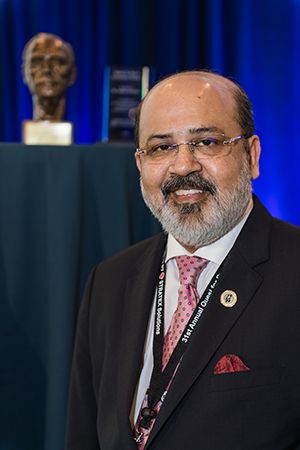 IAQ is an independent, self-supported, nonprofit, nongovernmental organization that is administered by an assembly of individuals who have been elected by their peers from among the most respected, active, and experienced protagonists of quality in the world.

“IAQ is a prestigious global organization comprised of about 150 professionals from the field of quality,” said Al Faber, President and CEO of the Baldrige Foundation. “Sunil’s inclusion in this group is a recognition of the global leadership role he has played in quality and performance excellence over several decades.”

“Sunil’s election by quality and performance excellence peers as an International Academy of Quality Academician places him in the highest echelons of professionals globally,” said Dr. Kathryn Eggleston, Chair of the Baldrige Foundation Board of Directors. “That his election required supporting nominations from at least two continents further demonstrates his recognized status as a global quality and performance excellence practitioner and thought leader.”

Looking toward the contribution he hopes to make as a member of the Academy, Sinha said, “IAQ will be emphasizing collaborative efforts in a few areas where the Academy can make a significant contribution to the promotion of the global cause of quality and performance excellence in their widest possible dimensions. It has supported the United Nations in its early efforts to bring quality to the developing world. Currently, IAQ is assisting national quality movements in India, Brazil, Russia, and China as they develop mature programs that support capacity development. Think Tanks—an organizing structure within the Academy—currently address the application of quality principles in governance, health care, and education.”

“Sunil’s work in the areas of quality and performance excellence closely align with the efforts of the Baldrige Foundation and the Baldrige Performance Excellence Program,” continued Faber. “Sunil has been an invaluable contributor to our work as a member of our Board.”

“This is a recognition for the TATA Group and the Baldrige Foundation, which have been pillars of the quality movement in our many nation-building companies,” Sinha concluded. “I am grateful to the Tata Group and Baldrige Foundation for their immense role in shaping my own quality journey for the last three decades and hope to carry forward the stories and work of TATA and Baldrige as a representative of this society.”